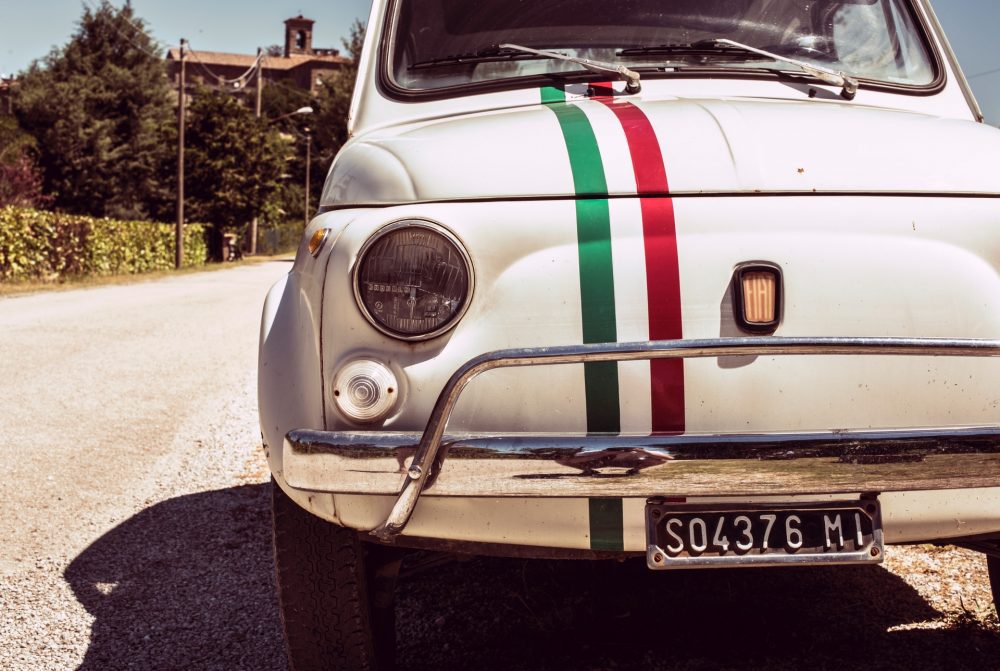 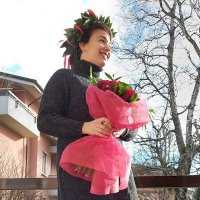 Have you noticed everywhere in Italy there are different regional foods? That’s right, every Italian region has their own traditional and peculiar delicacies, made from local produce. Piedmont is a land of amazing wines, gianduja (chocolate with hazelnuts), rice, and truffles, Tuscany is famous for its bread, made without salt, extra virgin olive oil, pappardelle, and vegetable soup “ribollita”, Sardinia is a land of heartfelt tradition made of goat cheeses, dumplings “ciccioneddus” and “malloreddus” typical pasta.

Maybe you’re wondering why there’s such a variety of Italian regional food even if Italy is quite a small country. Every region has its peculiarities thanks to historical, cultural, and geographical differences. Let me guide you on a little journey through time and space of three of Italy’s most interesting regions.

In the North-West of Italy, near the borders with Switzerland and France, Piedmont is known all over the world for its rich food and wine tradition.

The weather is mild yet colder than other Italian regions and the landscapes are quite diversified: the Alps hold the centuries-old recipes of traditional cheeses and cold cuts, the lands in the Novara province are soaked in the water of the rice plantations and the hills in the South, the Langhe and Roero are dotted with vines and known for truffles and wines. 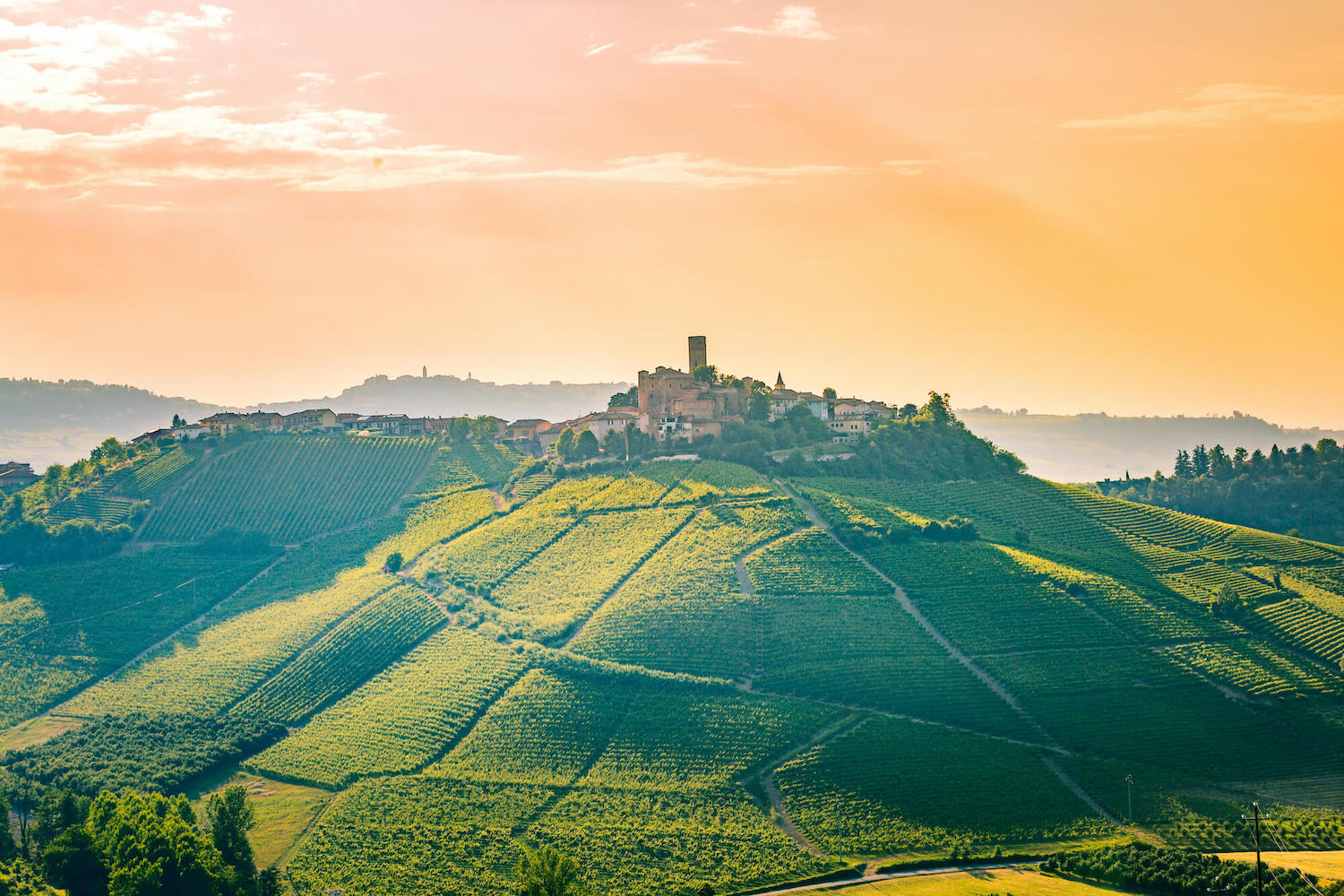 Historically Piedmont has been a French ruled area: that influenced not only its cultural and architectural heritage but also its food traditions and language. In Piedmontese dialects you can find lots of words similar to French and some commonalities in the local delicacies. For instance, both France and Piedmont are quite known for the chocolate tradition, marron glacé (chestnuts covered in sugar syrup and glazed) and wine making tradition.

One of the typical Piedmontese meals is a creamy risotto with cheese, paired with a glass of Nebbiolo wine. Our favorite traditional rice is Carnaroli rice by Riso Buono. The rice is aged one year after the harvest: during that time its aroma and flavor enhance while the grains increase in size. While cooking risotto Carnaroli rice releases the right amount of starch that will turn your risotto into a creamy traditional Piedmontese delicacy. A touch of truffle oil and voilà!

Moving to center Italy, Tuscany is our next stop. The West of the region faces the Ligure sea: that makes the weather warmer and windy, perfect for producing cultivations.

Tuscany takes its name from its first inhabitants, the Etruscans, who lived there long before Romans. After the Medieval era with the Medici family Tuscany’s town, called comuni, grew richer and more powerful. That period of prosperity enriched the Tuscany food and wines tradition, and now we can enjoy so many different delicacies.

The main ingredients are extra virgin olive oil, the famous Tuscan bread made without salt and used in many dishes, such as panzanella and crostini, cold cuts and lots of cheeses and vegetables. 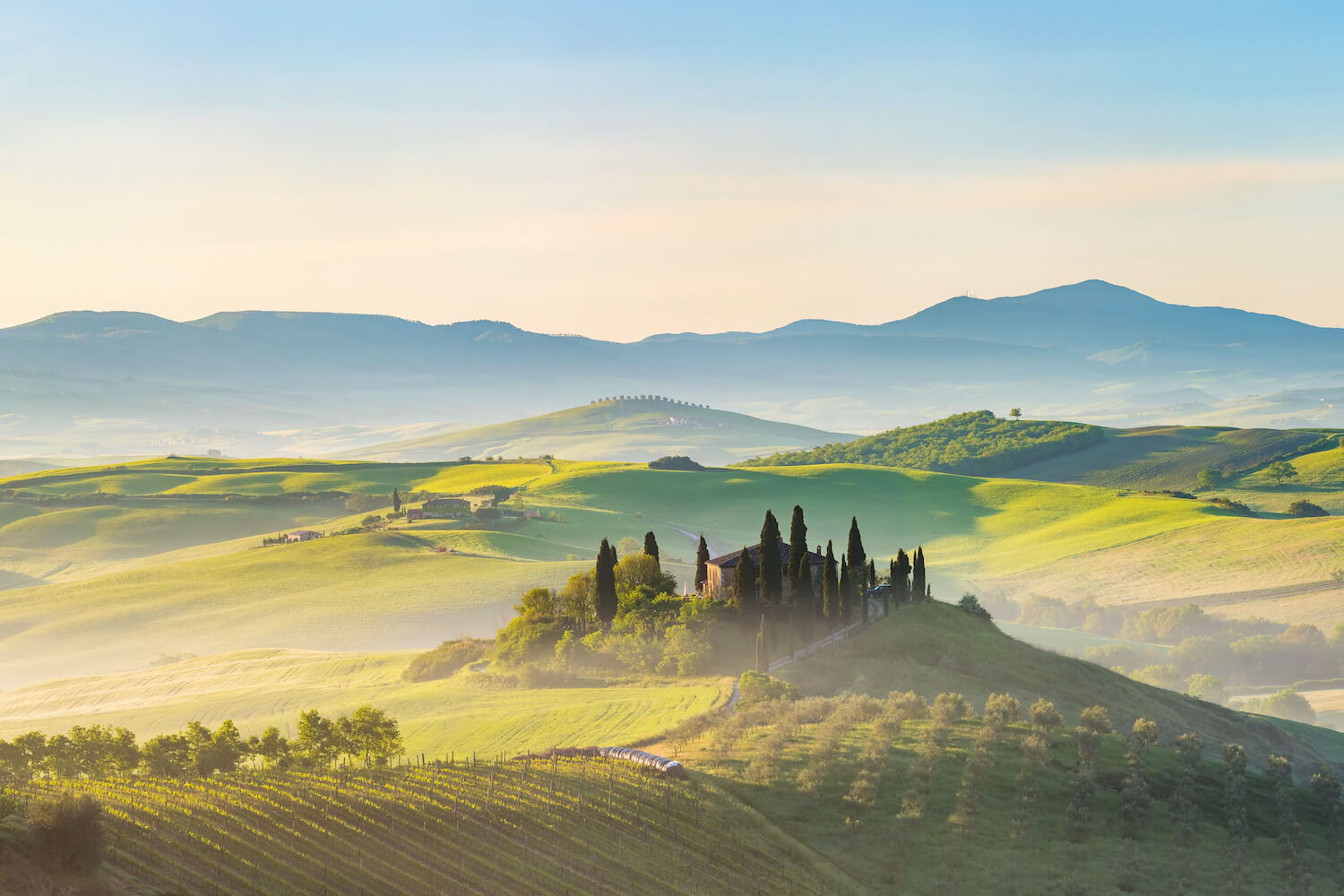 For a quick but truly Tuscanian snack try Frantoio Franci Toscano IGP Olive Oil on a slice of good sourdough bread: it’s fresh, with a slightly sweet flavor in the beginning, that gets palatably and harmoniously bitter and spicy. Green with hints of gold is a precious oil to enjoy raw in soups, salads and in pinzimonio with fresh vegetables.

Let’s pair a good wine with that noble oil: Rosso di Montepulciano by La Ciarliana is the perfect wine, to taste true Tuscany tradition. Made from Sangiovese, Canaiolo and Merlot grapes is a red wine to accompany entrees and light main dishes. Intriguing and lively it will stay with you a long while without getting boring.

Sardinia: a world of its own

Sardinia is an island in the West of Italy, right below the French island Corsica. It’s isolated geographical position has made Sardinia a world of its own with its own language, originated from the union of Latin and the local dialect.

The weather is the typical mild Mediterranean weather, that makes Sardinia a land of olives, vines, and cereals. The ancient pastoral tradition of goats and sheep breeding led Sardinia to be known for its strong and delicious cheeses, and a lot of Sardinian delicacies are made with them, one for all seada: a sweet fried dumpling filled with honey and fresh cheese “casu furriau”. 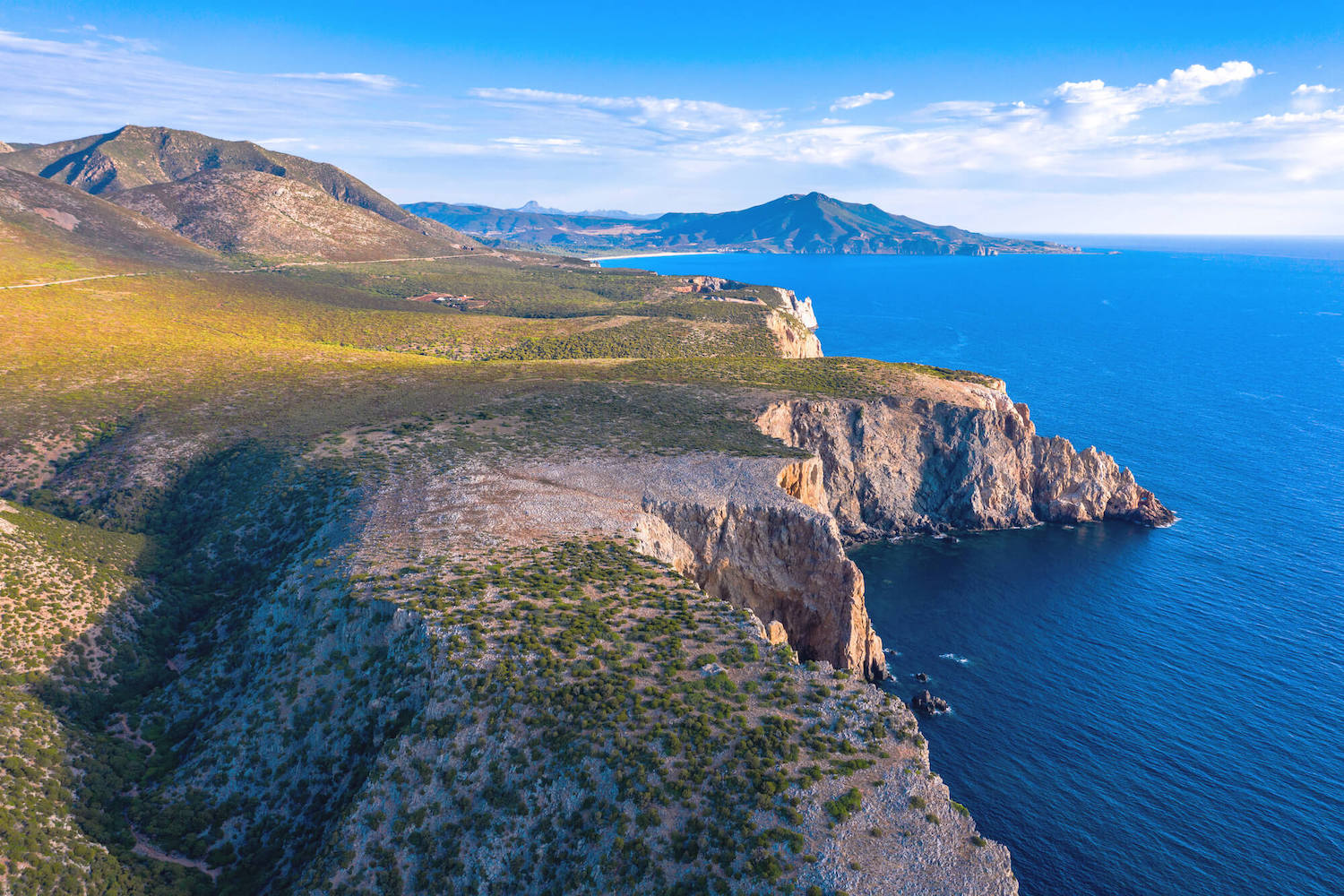 With local cereals the Sardinian bread, Pane Carasau, is made: thin and crisp it has a peculiar flavor. Our favorite Pane Carasau is the one made by Murru&Lai bakery in Lula, in the province of Nuoro. For three generations they have baked the traditional Sardinian bread, perfect as a snack or to accompany meals.

To taste the true spirit of Sardinia Tanca Gioia Carignano wine is perfect: made with a peculiar variety of grape that comes from Spain, the Carignano, its grapes grow rocked by the wind and the salsedine from the sea, in the quite arid soil of the little island of San Pietro in the South-West of Sardinia. The result is an intense red wine full of character that is perfect to share with your friends during a fish-based feast.

Emilia Romagna: the capital of Made in Italy

Emilia Romagna is the capital of Made in Italy. Its climate is temperate with very hot summers and cold winters.
Its name encompasses two historical regions that differ in cultural characteristics and gastronomic traditions: in Emilia, tortellini are prepared, while in Romagna, cappelletti are made.
The people of Romagna are said to be outgoing and welcoming, while the people of Emilia are somewhat more closed off.

Among the most popular recipes in Emilia are “tigelle” and in Romagna “piadina”.
For a gastronomic journey through the region, I recommend preparing a piadina with Mortadella, Parmigiano Reggiano and Balsamic Vinegar. 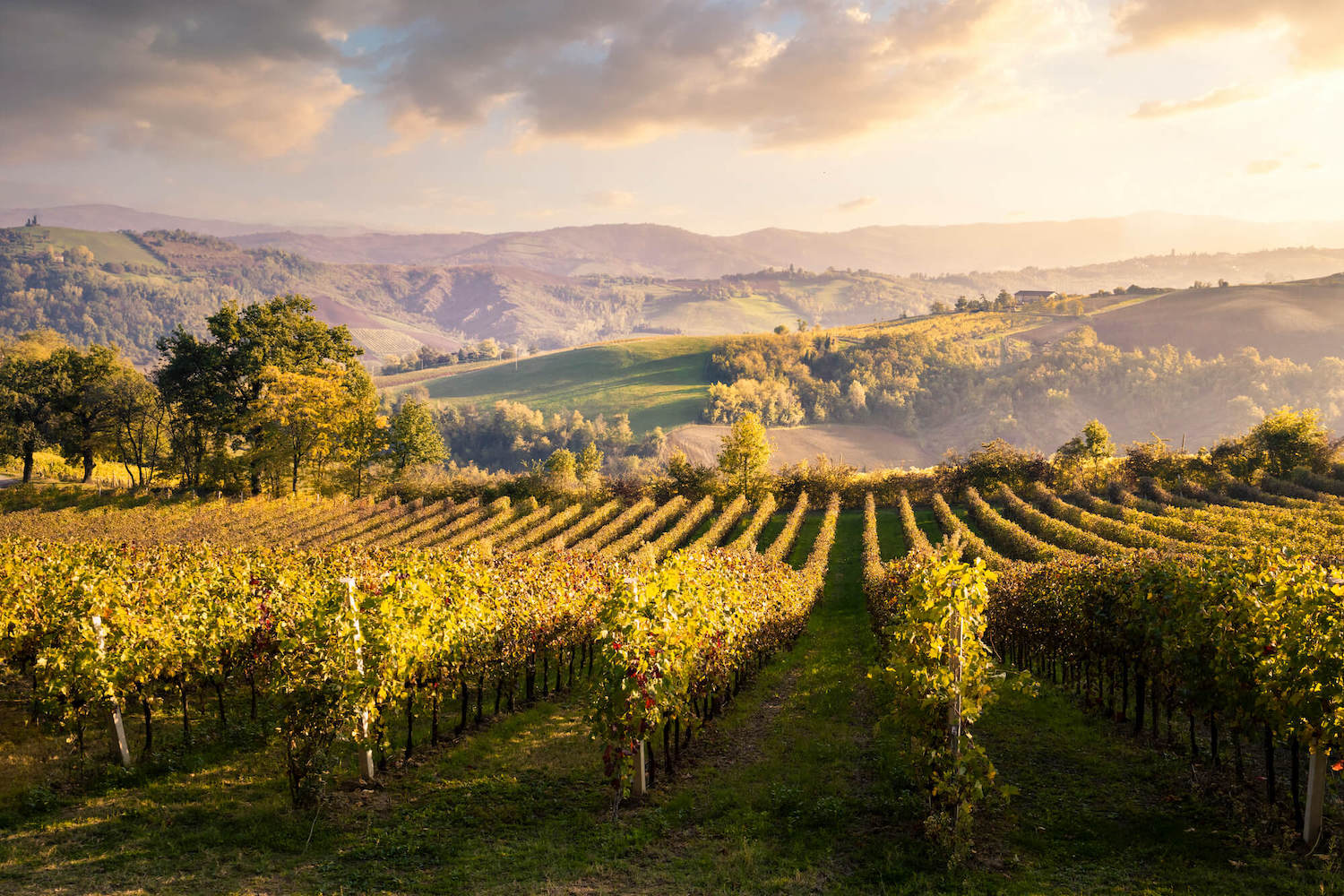 Discover true Italian regional food with Italian Delights. Take a chance to experience Italian flavors and tradition and share them with your loved ones.

– Until next time, With Love!
Laura